While working on a high altitude balloon project with my coworkers, I bought an Arduino Inventors Kit from Sparkfun. I started playing around with it then I was intrigued when I heard about Nodebots.

I started learning about Node.js through codeschool.com and became very interested after going through some examples. Node.js is night and day different from my day job of writing C# form applications. That is a major reason I was drawn to learning more about it.

When I heard about Nodebots and Johnny-Five, I had just the excuse I needed to plug my Arduino back up. Within no time at all I was controlling LEDs, motors and then building a robot.

I came across the Sumobot Jr. design. I was drawn to the simplicity of the design and the low cost for getting started. After doing some planning I put together orders for parts.

The local maker spaces in my area don’t have a laser-cutter so I used Ponoko to laser-cut plywood frames and wheels. The Github repository has cutting plans ready to order from Ponoko.

I ordered servos and battery box from Pololu.

The 3d printed ball caster I ordered was from Shapeways. I had a hard time finding the right size bearing ball. Eventually, I realized I could borrow a marble from my son’s toy box.

The build process was pretty straight forward. There is a full assembly video from the designer on YouTube.

I would recommend this design to anyone who is interested in getting started with Nodebots or Arduino in general. The most challenging thing for me was soldering the servo’s power leads directly to the battery box. This is easy to get around by soldering to the leads off the battery box instead. 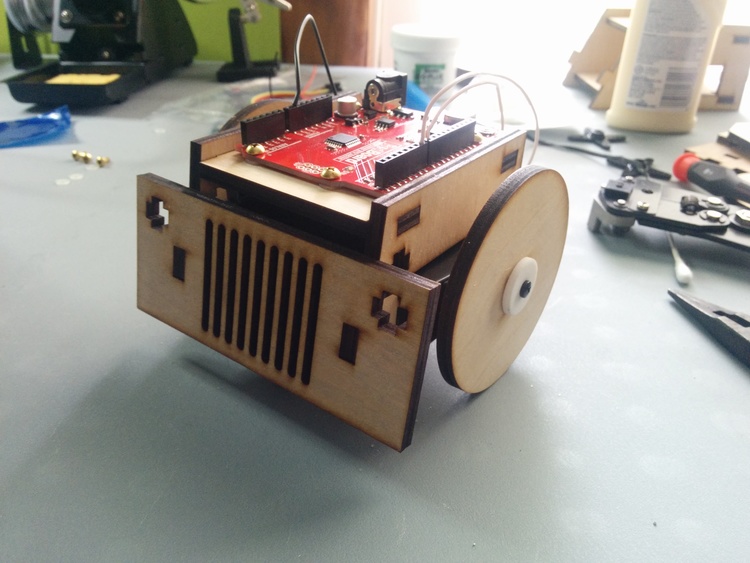 After I built the first SumoBot Jr, a speaking date at the local Javascript user-group came open. With a little preparation, I agreed to do a build for the group. This was my first experience with public speaking, but after the initial nervousness wore off, I had a great time. I look forward to speaking more in the future.

The full video of my talk / build is available on YouTube as well.